2009 PhD Natural and Mathematical Sciences
University of Groningen, The Netherlands.

Harold has a creative pulse for interdisciplinary methods and is successful in identifying analogies across subjects that give new ways to understand and study evolving systems, such as a statistical-mechanical view of population genetics, an evolutionary description of language and culture and sonification of protein structures.

Principally I want to understand the origin and evolution of phenotypic complexity. This is a subject that is not entirely understood. “Complexity” is not clearly defined, or measurable in terms of a single objective measure. But that lies at the heart of what complexity is. In the organismic context, my  perspective is that of the hierarchical and  interdependent organization of  traits. Although this is the approach of systems biology, I study not the functioning and properties of this systems’ complexity in an organism, but rather the evolutionary causes and consequences of variation in complexity in a population of individuals. For this purpose, I apply ideas of information theory, complexity science together with population genetics to study evolutionary innovations through genetic assimilation, cooperation through symbiosis, and unfolding from pre-adaptations. 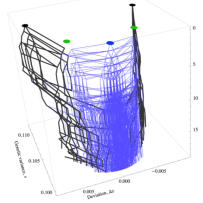 A more conservative approach to complexity in evolution is to understand the properties of the genotype-phenotype map, chiefly measured and understood as epistasis (non-aditive effects of genes on a phenotype), pleiotropy (indirect effects on fitness), and more generally, other genetic effects on the phenotype. I work with models of population genetics to further understand how these kinds of factors affect evolution under selection and genetic drift.

I work with a model organism, the bacteriophage Φχ174 (Microviridae), to understand how amino acid interactions amongst the capsid proteins determine epistatic factors.

I recently joined the KLI near Vienna to develop a theoretical framework for cultural change and evolution based on language games and stochastic models. I propose studying parallels and connection between cultural change and organic evolution using computational and mathematical models. My proposal considers cognitive accounts of concept formation by applying notions of neuroscience and of evolutionary biology to language games. These can be coupled to population dynamics, including spatial mobility and also generational change to study genetic-cultural coevolution.